This post is about designing temporary tattoos for photoshoots, film, theatre and television. The design and creation ultimately falls to the head of makeup, with input from the director, actor and script. We look at where to get tattoo design ideas and what to consider when designing a tattoo for a character.

The head of the makeup department is responsible for the design and, ultimately, overseeing implementation of the tattoo. To help inspire the design, they will take a lot of information from the script, including when and where the story is set, as well as character traits. Likewise, they will liaise with the director and actor for their ideas and wishes. Some good old fashioned research into tattoos relevant to the time and place of the story never hurts either.

Creating temporary tattoos for a character is not just about picking a design that looks nice. You need to consider how a tattoo helps to define that character and their backstory, as well as how it fits into the overall story. By exploring the following aspects, the design options are narrowed and, hopefully, the right path to take is revealed.

Why Does This Person Have a Tattoo? A Russian prisoner’s tattoos tell a story. Taken from Danzig Baldayev’s “Russian Criminal Tattoo” book series; a record of tattoos seen during his career as a prison guard.

A big part of designing a tattoo for a character is understanding just who the person is. That is, there are often personal or cultural reasons behind tattoos, as well as the foolish and trivial. For example:

When and Where is the Story Set?

When designing a tattoo for a production, consider where and when the story is set. For instance, there is no point doing a modern design if the production is set in the 1940s.

Also, at various times in history, tattoos were taboo in some cultures or countries or even illegal. For example, tattoos were outlawed in Japan from the start of the Meiji period until after WWII. During this time tattooing went underground – even today tattoos still have a negative image in Japan. Tattooed sailor aboard the USS New Jersey, 1944. Photo by Charles Fenno Jacobs, from the National Archives.

Where is the Tattoo?

Placement of a tattoo is key and certain tattoos are meant to be done in certain places. However, there is no point doing a great tattoo if the costume covers it up the whole time.

The script may tell you certain information about its placement. For example, it may state where the tattoo is and who sees it. Or, conversely, the tattoo may be required to be kept secret from general view until such time when it gets revealed.

Tattoo location on the body has the following terminology:

How Old is the Tattoo?

Consider how long ago the tattoo was done, as real tattoos fade over a long time. As a result, the image and its edges become blurry and the colours become dull, merging into each other. This leaves a flat, fuzzy and faded tattoo.

Freshly done tattoos are slightly red around the edges. After which some scabbing will develop. “Onion skin” is where the colours look cloudy until the skin has fully healed for a few days, after which the colours should be clear and sharp.

How and Where was it Done?

Firstly, of course, you could doodle something yourself, should you be artistically blessed, as there is inspiration for art all around. However, should you need a guiding hand, here are some places to help you find the right design.

There are many online tattoo design websites that have thousands of tattoo designs in all sorts of categories. Some are free, some charge a small fee to download a design and others offer annual membership with unlimited downloading.

For those really getting inked, the image offered should be a full colour, high resolution download. This means that the design can be printed clearly and with great detail, ready to be taken to the tattoo studio for reference.

Some sites also provide a stencil with the image, which is used to apply the image outline and main details accurately to your skin. For those creating for a production, you can use the download to print off your own transfers.

While you won’t get a handy high-resolution printout or stencil from a book, they can provide lots of inspiration and you get to see the tattoos on people, rather than as a flat template. Furthermore, the internet has a wealth of tattoo images to inspire and it’s easy enough to download images for reference.

If you’re not looking for anything really specific or custom designed, you can use ready-printed transfers. These come in a huge variety of designs, styles, colours and sizes. As a result, there are temporary tattoos for all parts of the body in a vast array of design options.

Ready-to-use temporary tattoos are good for filming continuity, as well as creating a quick or last-minute tattoo. In addition, for anyone wanting to really get inked, they are good for experimenting with before getting the real deal.

Where to buy: Tinsley Transfers | Temptu

Thinking about all the above will let you know what the design options are, as well as the limitations. Once you have your design confirmed and agreed by the director, you just have to create it. Here’s our guide to creating a temporary tattoo.

The beauty of temporary tattoos is being able to experiment with ideas and having a trial run. Sometimes seeing a tattoo in situ is the best way to gauge what works and what doesn’t. 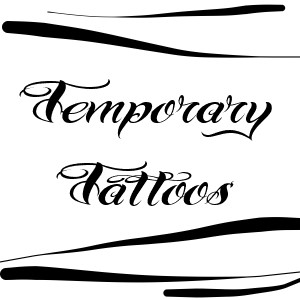