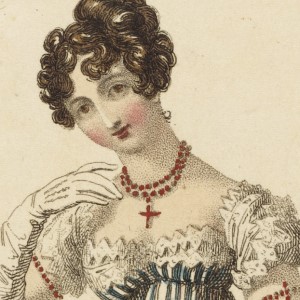 Hairstyles took a dramatic turn in the late 1700s when the large powdered constructions fell out of fashion, and smaller styles became all the rage. Ancient Greek and Roman artworks showing elegant chignons, braids and curls were now the blueprint for fashion and defined women’s Regency hairstyles. During the late Regency period, hairstyles became tall and fancy again, with elaborate bows and loops.

In 1811, when King George III was deemed unfit to rule due to illness, his son (the Prince Regent) took over. When his father died in 1820, the Prince became King George IV, and the Regency ended.

However, when referencing fashion, the term Regency represents a longer time. Therefore, we consider the Regency era to be 1790-1837.

Neoclassicism was a key influence on fashion during the early Regency, inspired by ancient Greek and Roman statues and works of art. As a result, women’s Regency hairstyles featured soft chignons, ringlets and curls decorated with headbands and fillets.

There was also a great deal of fascination for ancient Egypt, inspired by the discoveries that accompanied Napoleon’s campaign in Egypt and Syria (1798–1801).

Around 1820, women’s fashion started to change. For example, the Empire Line disappeared as waists moved to a more natural position and skirts widened. Hairstyles also moved with the times, becoming more elaborate with the Apollo Knot and other hairstyles influenced by central Europe via Paris.

Women’s hairstyles had been slowly gravitating towards the more natural styles seen on ancient Greek and Roman statues before the French Revolution (1789–1799) happened.

However, the French Revolution changed things dramatically in Europe. As a result, the fashion for elaborate and complicated hairstyles and wigs was gone. In short, no one wanted to be mistaken for the French aristocracy anymore.

The Merveilleuses were members of a fashionable youth subculture that scandalised Paris during the French Directorate (1795-1799) with flimsy muslin clothing and outlandish behaviour.

Perhaps their socialising, affected mannerisms and risqué clothing were a reaction to the severe and repressed atmosphere of the Revolution. Whatever their motive, they did have a tremendous influence on women’s fashion and were instrumental in popularising the Neoclassical style. It was also an easy look for women of all classes to copy and replicate.

Overall, France continued to be the leader in European fashion during the Regency. For example, British publications such as Ackermann’s Repository and La Belle Assemblée relayed the latest trends, fabrics, colours and styles from France (Paris, in particular).

In 1795, the government of Great Britain introduced a tax on hair powder. The thought was if someone could afford to buy hair powder, they could also afford to pay tax.

However, the fashion for powdering wigs and hair was already on the wane – this tax just hastened its demise. Even though there was a later reduction in tax, few people resumed using hair powder.

There were exemptions from paying the tax. For example, the Royal Family and their servants were exempt. Likewise, professions such as mariners and yeomen, who wore wigs as part of their uniform or attire, were exempted.

Buns and topknots were an essential element of women’s Regency hairstyles – few Regency hairstyles are complete without one. They did evolve during the period, changing position and complexity over the years. Overall, hairstyles started out as simple, but soon became more intricate and complicated as the years passed by.

A brief timeline of the Regency bun, chignon and topknot:

Curls and ringlets are an essential part of most women’s Regency hairstyles. Generally, they were short in length and rarely below the jawline.

Ringlets and curls were worn in different ways, depending on what was fashionable at the time. For instance, the early Regency saw simple hairstyles such as soft, almost dishevelled curls accompanying a bun. However, as the era progressed, curls and ringlets became an important feature and were arranged in a more-structured mass at the side of the face.

Regency women parted their hair in the centre – unless the hair was taken straight back when, of course, there was no parting. There was also a fashion in the 1830s to part the front hair into a V shape – this is usually seen with an Apollo Knot or Biedermeier hairstyle.

Hair was also parted from ear to ear for some hairstyles to divide the shorter “front hair” from the longer “back hair”. The front was curled and the longer hair was drawn up into a bun or chignon.

Women’s Regency hairstyles (or element of a style) were often given names. The following were commonly used in Regency-era publications when describing the latest styles or fashions:

During the mid-1790s, the short, layered and choppy man’s hairstyle known as the Coiffure à la Titus became popular with women.

Male enthusiasm for the short haircut happened because of a 1791 production of Voltaire’s play, Brutus. Playing the part of Titus was acclaimed French actor, Talma. He sported the short haircut as seen on Roman statues – et voila, a trend was born. Quite what sparked the leap jump to women is not clearly documented. However, we can see from portraits and publications that the Titus cut was very much in vogue for over fifteen years from 1794.

Women were often ridiculed (mainly by men) for being unfeminine, unnatural and outspoken. Additionally, short hair on women was historically associated with punishment, disease or sacrifice – not beauty.

Despite the critics, the style grew in popularity, becoming one of the most popular women’s Regency hairstyles during the early 1800s. It also became more refined, moving from a rough, spiky and tussled haircut in the early phase to one with more styling and pomade.

Hair accessories were de rigueur for ladies attending social events. However, even for balls and the poshest of events, the Titus haircut was not generally decorated with accessories.

During the early 1810s, the Titus haircut started to decline in popularity. By 1820, illustrations of elaborate up-dos filled the fashion magazines, influenced by the court of Versailles. Ultimately, the short and carefree Titus had all but disappeared.

In 1824, a new Regency hairstyle arrived – the Apollo Knot – a distinctive hairstyle that featured a large bow on the crown. It eventually developed into tall bows, loops or twists of hair that stood high and proud on the crown – quite different to the soft and dreamy Grecian- and Roman-influenced styles of the early Regency.

To create the smooth bows and loops, hair would be wrapped around wire frames or stiff ribbon bands. Hair pieces were also used to create the shapes and pinned into the hair.

As time progressed, the hairstyle became even fancier, reaching its towering pinnacle in the 1830s. Then, like all fashions, it was no longer the in-thing and disappeared.

Accessories adorned women’s Regency hairstyles and were dictated by whether it was daytime or evening, outdoor or at home. Additionally, wealth and social standing also played a part.

Evening hairstyles were more elaborate and decorated with various hair accessories. Moreover, fancy hair ornaments worn for formal events and balls were a sign of the family’s wealth.

The cap became mainstream feminine apparel during the Regency, worn by women of all classes (including mothers, married women, old maids, widows, housekeepers and servants, and children).

Caps were unstructured, made from lightweight fabrics and fitted the head closely, with an optional brim or edging. The material and design determine when the cap was worn – for example:

Combs were rarely plain and often decorated with jewels, including precious gemstones like topaz and pearl. They were worn as a decorative feature; for example, behind a topknot or bun.

The fashion for diadems (basically, a tiara or crown) came from the love of Greek and Roman fashion. For this reason, designs often featured things like a wreath of leaves – clearly influenced by Neoclassical art.

Diadems were worn for formal occasions and balls. Consequently, a decoration of jewels was a visible showing off of the husband’s wealth.

A tall feather plume (or plumes) were worn by Regency ladies for parties and evening balls. Additionally, hair combs could have small feathers glued to them. For presentations or events at Court, it was de rigueur to wear ostrich feathers with a court dress. Likewise, headdresses were decorated with ostrich feathers.

Flowers were worn, in particular, by young ladies at parties. For example, individual flowers such as daisies, Damask roses or coquelicots were casually placed throughout the hairstyle. Alternatively, flowers were fashioned into a braid to create a statement piece. Half and full wreaths of flowers were also fashionable.

Caps, turbans, hats and bonnets were also decorated with flowers. It depended on the occasion and current fashion as to what flowers were popular that season.

Scarves and veils were made from fine, transparent materials such as French, English or Mechlin lace, or sarsnet (a thin twilled fabric). They were worn loosely draped over the head.

Lafoy. J. B. M. D. (1817). The Complete Coiffeur Or An Essay on the Art of Adorning Natural, and of Creating Artificial, Beauty.