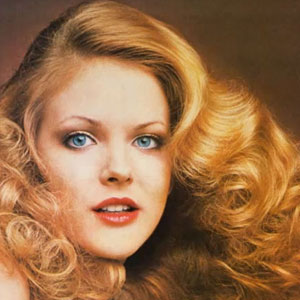 Women’s 1970s hairstyles varied from long, soft and feminine to short, edgy and androgynous. There was also a lot of experimentation and new styles were created throughout the decade. Hair was sometimes a direct expression of the times. Here we take a look at what and who influenced 1970s hairstyles, as well as the most popular styles worn by women throughout the decade.

Films stars were as influential as ever on fashion. For instance, there was Liza Minelli’s short feathered cut in Cabaret (1972). Jane Fonda had an androgynous shag hairstyle in Klute (1971) – a hairstyle seen in various forms throughout the decade.

Television was a popular source of entertainment, and the TV set was often the focal point of the home. Subsequently, TV had a big influence on people’s lives, fashion choices and attitudes.

Farrah Fawcett-Majors was one massive influence on late-1970s hair. Ah, the lovely Farrah hit our screens in 1976 courtesy of Charlie’s Angels. With her long, feather cut and big flicked sides – known as the Farrah Flick – she was the poster girl of many teen bedrooms. And Dads didn’t mind a jot!

Nostalgia was a big thing in the 1970s, leading to a whimsical look back to various periods, especially the 1920s to the 1940s. Looking to the past can be seen in fashion, TV shows, films, and music.

For example, several films were set during the 1920s, including The Boy Friend (1971) with Twiggy and The Great Gatsby (1974) with Mia Farrow, who kept the evergreen bob in fashion.

Music and fashion continued to hold hands. The 1970s sounds of glam rock, disco, funk, northern soul, new wave and punk each had their signature looks and style.

Punks were out to shock with cropped hair, shaved heads and crazy-coloured sculptures, such as Mohicans, horns and spikes.

Influential women in music include Donna Summer (numerous wigs and looks, but always glam and fashionable), Cher, Debbie Harry (bleached blonde with a fringe), Barbra Streisand and Siouxsie Sioux (spiked black hair), among many, many others.

Hairdressers created a few styles during the decade that were copied by many. Some can even still be seen today, albeit with a modern update.

The shag, as seen on Jane Fonda in Klute, is credited to hairdresser Paul McGregor.

Popular Women's Hairstyles of the 1970s

Hairstyles that encouraged the black community to embrace their natural hair structure continued to be popular in the 1970s. After emerging in the 1960s, predominantly as part of the black pride movement, the afro continued its rise in popularity.

During the 1970s, the afro was as much about being fashionable as it was political. It was worn by both sexes throughout the decade, mainly by African-Americans and the black community.

However, other ethnic groups wore it. It also gave people with very curly hair an alternative to the uniform long, straight hair look.

Perming allowed Caucasian hair to have tight curls. From the mid-1970s onwards, various men and women (including the famous, like Barbra Streisand) had this take on an afro.

The Ape was an early 1970s style that consisted of shorter hair on top combined with longer hair at the back. It also had lots of layering throughout the whole hair, giving the hair a shaggy look. It fell out of fashion by about 1972.

In the late 1970s, creating an asymmetrical look was popular. It could be anything from a ponytail on one side of the head or waves dressed up and out on one side. This trend continued into the 1980s.

Cornrows are created when the hair is plaited flat to the scalp, either in straight rows or a myriad of intricate patterns. It’s a style that requires no relaxers or other harsh chemicals. Long braided hair can have the ends secured with elastic bands and decorated with beads, flowers or shells.

Cornrows are an ancient and traditional way of styling hair in Africa and for African-descended people worldwide. They became fashionable in the 1960s and 1970s due to the black pride movement.

Not all black women had cornrows or an afro. Wigs were still a popular alternative, styled in various short and long fashionable looks.

A flicked-back fringe created wings – named after the wing shape created by the side of the face.

Flicks could go all the way around the bottom of shorter hair, creating a circle of volume. The crown and top of the hair were left straight.

Flicks and wings were created with the new breed of heated styling tools, as well as rollers and tongs. Some women opted for a perm to create a curl, which was easy to flick out.

Long and mid-length hair in the 1970s could be roller-set or permed to form large, soft and bouncy-looking curls. The volume and curl normally started about halfway down the length of the hair.

Long and centre-parted straight hair had been in vogue since the late 1960s – and its popularity continued right through the 1970s.

It is a very commonly seen women’s 1970s hairstyle, especially with the younger generation and teenage schoolgirls. Long hair was also popular with celebrities, including actresses Peggy Lipton (who appeared in the hit TV series Mod Squad) and Ali MacGraw.

Punk has its rightful place in 1970s hair history, despite not being followed by the masses.

Whether hair was short, spiked, shaved, or sculpted, the punk look was the opposite of any style classed as ordinary. It was a look created by rebellious youths and emerged in the UK in late 1976.

Some styles mixed long hair with shaved areas, like Mohicans and horns. Alternatively, wearers went for a full-on skinhead (a revival of a 1950s style), though girls often left their fringe and side sections longer.

The most commonly seen hair colours were jet black (like Siouxsie Sioux) or bleached blonde (like Debbie Harry from Blondie). However, punk also brought coloured hair to the streets – and anything went.

Bright colours were created by using professional products like Crazy Color, a range of neon colours launched in 1977, or everyday items like food colourings. Even products like Kool-Aid and Kia-Ora were colourants. Text and patterns were also put into the hair.

The Purdey & The Pageboy

The pageboy had been a popular hairstyle for many decades. British actress Joanna Lumley wore this bowl-like version of a pageboy in her role as Purdey for the TV show The New Avengers (1976-77). Hence, it was known (in the UK at least) as a “Purdey” and was a popular women’s 1970s hairstyle.

Hairdresser Paul McGregor is credited as having created the shag haircut for Jane Fonda’s character Bree Daniels in the film Klute (1971).

It is a unisex, no frills cut that involved evenly-progressing layers with graduated sides and a full fringe.

The shag was a popular 1970s hairstyle for both sexes. Many women wore it, including Joan Jett, Suzi Quatro and Gillian Blake (from a UK TV show for children called Follyfoot).

A much longer and more wavy version of the shag was called the gypsy cut, as seen on singer Stevie Nicks.

Perming became more popular later in the decade, creating looks from tight curls to more bubble-like creations. One perm that was so 1970s was the stack perm.

Lots of small perm rods were stacked away from the head on things like chopsticks. It resulted in a mass of tight, smallish curls around the ends and length of the hair, while remaining straight on top around the crown area. In short, it created a halo of curls.

Vidal Sassoon protégé Trevor Sorbie created the angular-looking wedge haircut in 1974. The short haircut had steep-angled layers cut all around the sides and back, creating a triangular shape that was smooth on top.

One famous wearer of a wedge was American figure skater Dorothy Hamill. In 1976, she won a gold medal at the Winter Olympics – and women across America wanted a haircut just like the sweetheart of skating.

The use of hair colour had grown over the decades and home dyes were big business. Even “salon techniques” like highlighting were possible to attempt at home with kits like Clairol’s Quiet Touch.

Highlighting was popular and could be achieved by several techniques, including using a tail comb to weave the hair onto foils – a recently developed hairdressing technique. The activation time was made quicker by placing a heated double-sided flat iron on the foil packets.

Frosting was a technique used to create a natural sun-kissed highlighted look on brown and blonde hair. A bleaching product was painted lightly onto the hair with a narrow brush.

Concerns over the ingredients used in hair colours and links to cancer emerged in the 1970s. Colours that were more “natural” were introduced to the market and used vegetable dyes rather than harmful coal tar dyes. For example, Revlon had Colorsilk, the first hair colour without ammonia. The all-natural henna was being used more in the Western world, especially as red tints were popular.

Flicks, wings and curls needed the right hair tools. Hair tool brands were branching out from the simple curling iron or blow dryer to answer the hairstyling needs of the decade.

Multi-purpose hairdryers could do it all, including the super orange Supermax made by Gillette. It came with various comb and brush attachments to create all those women’s 1970s hairstyles.

Inness, Sherrie A. (2003). Disco Divas: Women and Popular Culture in the 1970s. University of Pennsylvania Press.