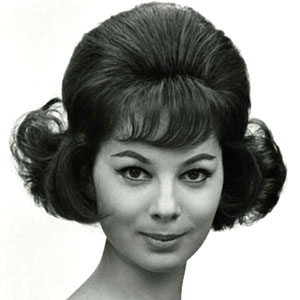 Here we take a look at women’s 1960s hairstyles, along with popular accessories. Hair in the 1960s saw a lot of diversity. Styles were influenced by the working classes, music, independent cinema, and social movements. In the UK, the fashion focus shifted from Paris to London, with designer Mary Quant leading the “Swinging London” revolution. Vidal Sassoon transformed women’s hairdressing, taking the humble bob and reinventing it to suit the mood of the decade.

Since the dawn of cinema, film stars have been influential on fashion trends. During the 1960s, New Wave cinema and Italian films, in particular, influenced popular culture. As a result, Brigitte Bardot was catapulted to international stardom and is arguably the ultimate 1960s siren.

Other iconic actresses of the era include Julie Christie, Catherine Deneuve, Audrey Hepburn, Sophia Loren, Elizabeth Taylor and Jane Birkin – all with their own style and signature look.

Music also had a big impact on fashion and women’s 1960s hairstyles. Since the late 1950s, the styles worn by the rock and roll singers and popular bands of the era were embraced by lovers of the music. From this, teenagers developed their own street fashion.

This influence continued right through the 1960s, from the über-fashionable mods, through to the psychedelic sounds of the later sixties.

Hairdressers have always developed new hairstyles and influenced hair fashions. For instance, the new decade welcomed the voluminous beehive, created by a Chicago-based hairdresser. This was followed by the advent of sharp, short crops by Vidal Sassoon, arguably the hairdressing star of the 1960s.

Raymond Bessone trained Vidal Sassoon and is believed to have influenced the modern bouffant.

In the second half of the decade, political activism, social changes and psychedelic rock music led to hair for both sexes becoming longer and left more natural. This was in keeping with the carefree yet radical attitudes of the hippie subculture.

Electric tongs and the new styling wand (the hairdryer and curler combo) enabled women to create big curls and lots of lift. Heated Carmen Rollers were available from 1965, making it easier to set and curl the hair at home, instead of having to go to the hairdressers.

Older women would not necessarily go for an ultra-fashionable modern style and may still have worn the smaller, more mature styles of the 1950s.

Many black women had straightened their hair during the forties and fifties because it was considered to be a socially acceptable way to dress one’s hair. However, towards the end of the fifties, hair slowly started being left natural and cut short.

The American Civil Rights Movement influenced students, activists and jazz musicians (like Nina Simone) to leave their hair natural and not straightened as a symbol of racial pride. Natural hair was a strong political symbol of black pride and identity.

Hair gradually became fuller and longer throughout the 1960s, as the trend for longer hair continued, along with the rise of political activism. Hair was teased into the classic round Afro hairstyle with a wide-toothed Afro pick.

The popularity of the Afro peaked in the late 1960s into the 1970s, during which time it moved from being a political statement into being fashionable. Ultimately, it became so fashionable that white people got their hair permed to be tight and curly (for example, Barbra Streisand).

This multi-layered hairstyle was created by celebrity hairdresser Louis Alexandre Raimon in the early 1960s. It was also known as the pinwheel.

The hair was cut in layers of petal-shaped points, two or three inches longs. It was then teased so that the layers did not lie smoothly together. The hair at the sides could either be curved around the ears or tousled over them.

It was a popular style and was worn at one point by Elizabeth Taylor and Grace Kelly. 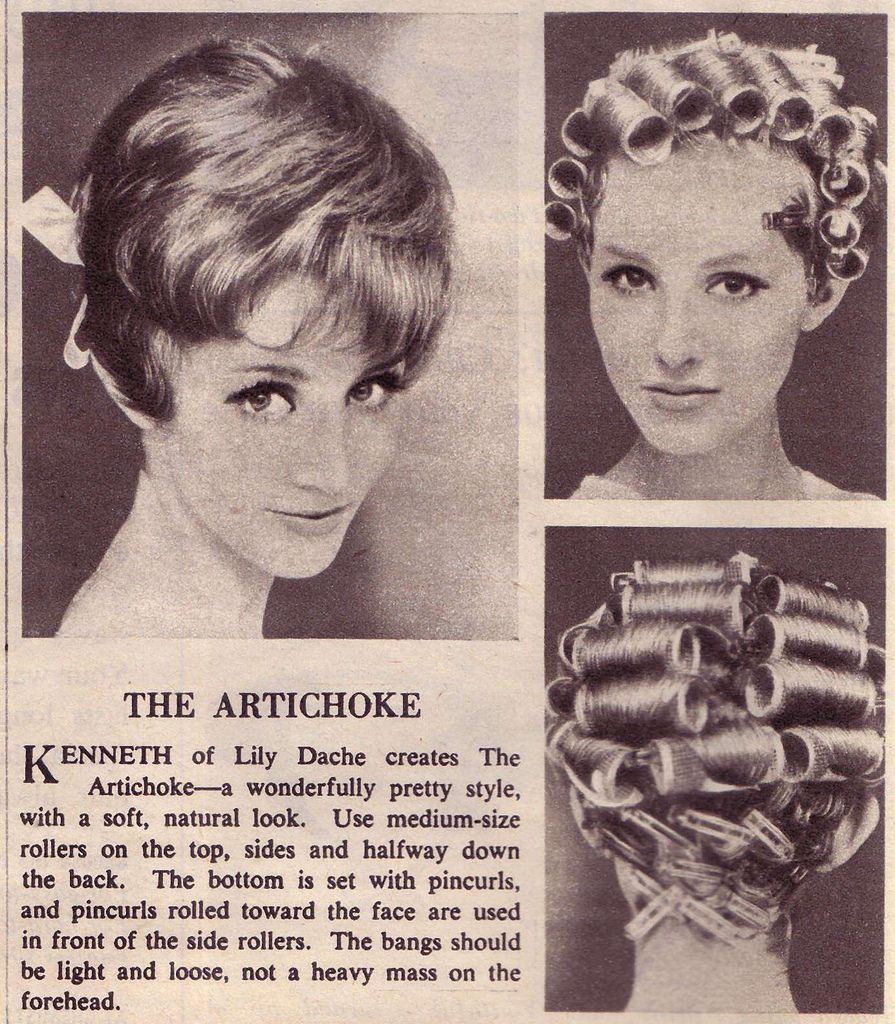 The beehive is a classic vintage 1960s hairstyle and one of the enduring symbols of the early sixties. The distinctively cone-shaped, backcombed and lacquered mountain of hair would last for many days, with a bit of tweaking and lashings of Aqua Net.

The creation of the 1960s beehive is credited to Margaret Vinci Heldt of Elmhurst, Illinois – the owner of the Margaret Vinci Coiffures in downtown Chicago.

She had been asked by the editors of Modern Beauty Shop magazine to design a new hairstyle that would reflect the coming decade. Subsequently, she contributed to an article that appeared in the February 1960 edition – and the modern beehive was born.

Interestingly, a beehive-type hairstyle had been seen in fifteenth-century Italy, albeit in a slightly differing form.

The elegant updo was incredibly popular, worn by the masses and the famous alike, including Dusty Springfield and Audrey Hepburn. A beehive could also be twinned with longer hair in a “half up half down” style, as worn by Bridgette Bardot and The Ronettes.

The 1960s bouffant carried on from the similar styles of the late 1950s. It varied in size from happily rounded to pretty big. It could be smooth and sleek or tousled with curls and waves. In a word, it was not just one particular look, but one that simply involved big and high pouffed-up hair.

Popular with women of all ages, the bouffant was straight forward enough to create and easy to wear.

To start with, hair was set in large rollers to create the initial lift needed. Once set, the hair was then backcombed to give it the structure, shape and size required. The outer layer of hair would then be combed or brushed smoother and put into place, before being finished with a mosquito-clearing cloud of hair lacquer to keep the hair in place.

To get even more bouff in their bouffant, a woman could use hairpieces on the crown, creating a towering height of hair. The hairpieces didn’t even need to match the hair colour – it was all about the height.

A popular style in the 1960s, the flicked up bob was an easy-to-wear and flexible style for medium-length or shorter hair.

Hair was worn long throughout the 1960s, but came more into vogue in the mid/late-1960s for both sexes.

During the first half of the 1960s, hair would not simply be left down without any styling. It was worn sleek, sometimes with a bit of lift, like some backcombing at the crown to achieve a rounded bouffant. The ends could also be put into a roller to create an upward curl.

Long hair could also be dressed up in a variety of ways. For example, a half ponytail finished with a few curls was popular.

To get hair poker straight, women could blow-dry it or even give it an iron. The trick here was to place a brown paper bag over the hair to help prevent it from getting singed.

Long hair was usually centre-parted and, if a fringe was grown, it would come down to below the brows.

Later in the decade, with the flower power influence, long hair could be left more natural. The hair was usually worn centre-parted and with or without a fringe. Conversely, for those not part of this movement, hair would be blow-dried into a smooth and voluminous style, as seen already earlier in the decade.

Vidal Sassoon started creating short cutting-edge styles in 1963. In contrast to the heavily-lacquered and teased bouffant, Vidal’s styles involved much less daily maintenance and fell easily into place. However, they did need regular trimming to keep the hair looking sharp.

Other famous women also had short haircuts that helped popularise this look. For example, in 1966, model Twiggy sported a side-parted short cut with a long, side-swept fringe. It was known as the “Twiggy Cut” to those wanting to have the same short style.

Likewise, Mia Farrow went from having long hair to a very short pixie cut during her time in soap opera Peyton Place. Her pixie cut can also be seen in Rosemary’s Baby (1968).

Both big bows and tiny little bows were used to adorn the hair. There were lots of sewing patterns available to make large bows at home. Consequently, they could come in all sorts of colours and materials. Ribbons were also tied around the head into a bow or came on a headband.

Combs and slides were made of plastic and often decorated with bows, rhinestones, bright swirls, or mod-inspired black and white geometric patterns.

Spanish mantilla combs were used by some women in the back of their huge beehives to prevent them from collapsing. Portobello Road in London or junk shops were good places to scout for an old tortoiseshell mantilla.

Plastic or material headbands were a popular accessory. They could vary from a couple of inches thick to even wider.

The headband continued to be worn in the late 1960s by the hippie brigade. Now, the band might be worn across the forehead, as opposed to the top of the head.

Headscarves were tied in several ways:

Natural items like feathers, leather bands, and flowers were worn later in the sixties with the advent of “flower power” and the hippies.

Fake hair was the big hair accessory of the 1960s when wigs and other hairpieces were worn openly. There was no shame in wearing a wig or fake hair – no one cared whether the item was detectable as fake or not.

Wigs were made of real hair and generally came as a “pull on and wear” cap or weft style. They were worn for convenience as well as fashion. Wigs could help a woman change their hair colour and style in an instant, as well as cover up any hair issues.

Hairpieces (again, made from real hair) were attached to the back of the head to create width and height, subsequently making big hair even bigger. Likewise, pieces could be used to create a top knot or other more dressed-up styles. Contrasting colours such as gold, peach and lavender were used, as well as those matching the wearer’s hair.

Clusters often had a comb attached to help push it into the natural hair. Long backfalls were attached to the crown to create a bouffant look at the back with a long tail of hair – useful to create length without having to wear a full wig.

Developments in hair colour science gave rise to new tints and tones. Improved off-the-shelf kits made it easier to dye at home.

In addition to the new colours came new techniques like frosting, which is the bleaching of small strands of top hair all over the head.

This website uses cookies to improve your experience while you navigate through the website. The cookies that are categorized as necessary are stored on your browser as they are essential for the working of basic functionalities of the website. We also use third-party cookies that help us analyse and understand how you use this website. These cookies will be stored in your browser only with your consent. You also have the option to opt-out of these cookies. But opting out of some of these cookies may affect your browsing experience.
Necessary Always Enabled