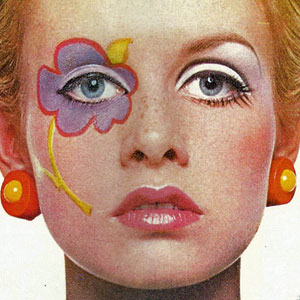 1960s makeup looks were at both ends of the scale, from the au naturel look of the hippie brigade to the dramatic black and white eyes of mod high-fashion – with elegance nestled in between. The 1960s was a youth-oriented decade. The baby boomers were coming of age and defined the decade as their own. Here we look at the popular colours and trends, as well as what influenced the 1960s style.

London had led the way with the mod look (“modernist”) since the late fifties. New stores catering to the fashion tastes of the younger generation popped up all over, notably in Carnaby Street and Kings Road.

The youth had a big influence on fashion. Since the 1950s, the young had disposable income to hand – and it was spent on looking stylish.

The mod look peaked between early 1964 and mid-1967. During this time, youth-orientated television shows, magazines and films united young people all around the world.

Mary Quant was instrumental in the whole “swinging sixties” youth movement with her fun fashions. In 1966, she launched a cosmetic range aimed squarely at young people – just like her clothing range.

Packaging was humble yet efficient and always featured the Quant daisy logo. Products were affordable and came with how-to instruction leaflets.

The whole range was colourful, fun and had interchangeable components. Quant makeup had tongue-in-cheek names and cheeky advertising – very different to most makeup brands on the market.

Yardley was also instrumental in the whole London scene and produced a popular range of colours and products. The phrase “The London Look” was often used in their adverts, with trendy British models Jean Shrimpton and Twiggy as its poster girls. They were the top models of the era, along with Pattie Boyd. Subsequently, their faces were known worldwide, influencing a generation of women with it.

Music inspired youth-lead fashion. Everything from rock and roll, Motown, pop, mod and psychedelic rock influenced the style of makeup worn. 1960s music took on the messages of the youth and the era. It gave the young permission to rebel, express and assert themselves.

Dances were incredibly popular, so being fashionable and dressing up to the nines was all part of the scene.

Films both influenced and embraced the trends of the day.

Elizabeth Taylor‘s makeup in Cleopatra (1963) is an example of how “current” was mixed with “historic”, creating a trendsetting 1960s Cleopatra. The Cleopatra phase started before the film’s actual release, with companies like Revlon leading the way with Cleopatra-inspired makeup colours and design.

The feminist movement re-emerged in the sixties. It focused on equality for all and the end of discrimination.

Some feminists viewed makeup as objectifying women as sex objects and so wore very little. Others, however, embraced makeup and wore it as a badge of honour.

Later in the 1960s, the hippie counterculture emerged and made its mark with a taste for more natural faces and products. Face and body painting is synonymous with the flower power movement and was a riot of colour.

The start of the 1960s saw a continuation of the 1950s makeup look. It involved a flicked upper eye line, matte eyeshadow (primarily in greys, greens and blues) on the eyelid, very soft blusher and lipstick ranging from browns and soft reds to corals and pinks.

Just a few years later, the focus had shifted to the eyes, when more dramatic eyeshadow application and colours took off. Conversely, the rest of the face was kept soft, natural and understated.

This high-fashion look revolved around a pastel-coloured eyelid with a dark eyeshadow in the socket crease. False eyelashes were really in, as was lashings of mascara. Lips were pastel or pale. This look became all the rage for the younger women. It created a sort of “baby doll face” look with its big lashes and pink lips.

Older women would likely stay with the more familiar (and more becoming) look of the early 1960s.

Foundations came in powder, cream, and liquid formulations. These collectively provided a range of coverage from full to more sheer products.

In about 1967, products became available that added a sheen to the face or a makeup foundation. For example, Revlon had Face Gleamers, and Yardley had Face Slickers.

A move towards a more natural look, where skin shone through, meant that the heavy matte and powdered finish was over for some.

Powder eyeshadows were matte. There were also cream, crayon and liquid formulations, some of which had a slight pearlescent sheen or iridescent shimmer.

The mod eye makeup look had a distinctive black eyeshadow line in the socket crease, teamed with a pale eyelid colour. The fashionable colour was white, though pastel blues and greens were also popular.

For the mod trend, a dark socket crease line was a definitive line – meaning it wasn’t blended or smudged much at all and applied in an arch from the inner to the outer eye. However, for a more everyday makeup look, it was OK to blend the dark crease line as much as wanted.

Using a darker colour in the eyelid crease hadn’t been done before the 1960s. Likewise, using a lighter shade under the brow was a relatively new trend. Other colours were also being used in the inner and outer corners of the eyes to create different eye makeup looks. This fashion continues today, albeit with a lot more blending.

The flicked upper eye line was in vogue (continuing from the end of the 1950s). The doe-eyed look involved a fully lined eye, finished with a flick at the outer corner.

A trend in about 1967 was to wear a line of white eyeliner directly behind the black eyeliner on the upper lashes.

Eyeliner came in pencil, cake and liquid formats in a variety of colours. However, if someone didn’t have an actual eyeliner, block mascara was a good substitute.

When false lashes were worn, eyeliner could be used to cover over the edge of the lash strip. A liner was employed to paint on to create bottom lid eyelashes – Twiggy sometimes wore this effect.

False eyelashes were the fashion accessory of the 1960s from about 1964 onwards. Fashionable women wore them every day. Some even wore two or three sets, one right on top of the other.

Lashes (both upper and lower) either came on a long strip that you cut to length or else as ready-to-wear, individual sets. There was also a choice of styles from more natural to thick and full.

The continuous strip that bottom lashes came on could be annoying – so women would cut them into smaller, more manageable pieces.

Lashes were made from human hair, synthetics, and animal hair like sable, mink and seal. Colour options were mainly black and brown, but other shades were available. Some also came decorated with rhinestones and glitter.

Mascara was now available in a tube with a wand applicator (invented in the 1950s), but solid block products were still used.

Block mascaras were activated with water (or more realistically spit) and mixed with the little brush that came with it.

There was also cream mascara in a tube that came with a separate brush in a small bag. Some products were waterproof; others were not.

Products like Revlon’s Fabulash were now lengthening the lashes, as well as colouring and curling.

Brows were groomed, shaped and defined with a brow or eyeliner pencil.

The thickness of the brow and amount of pencil used ranged from a more natural look (like Twiggy) to a heavier pencilled and more solid brow (for example, Elizabeth Taylor).

Women that were part of the hippie subculture would likely have left their eyebrows more natural and not pencilled in.

Blusher was not a main feature of 1960s makeup – it was applied delicately and sparingly to create a natural and soft glow. It could also be applied to add warmth and subtle definition/contour to the temples, hairline and under the jaw.

The fashionable colours were the pastels, such as coral, pink and peach. Various shades of red – from carmine to raspberry – were also available.

Blushers came in various formulations, including cream (in a tube or pot), liquid washes, solid cakes and a cream applied with a damp sponge. Colours were matte and free from shimmer and glitter.

Traditional lipsticks were mainly matte, though it was possible to add a sheen with Vaseline or specialist lip products. For example, Yardley’s Lip Slickers added a hint of pearly sheen and could be worn over or under lipstick (or just on its own). Similarly, Revlon had Moon Drops, which gave lips a wet-look sheen. In 1965, Max Factor had UltraLucent Creme lipstick.

When worn over regular lipstick, the “slicker type” products made the original colour much softer – transforming it to a pastel.

During the first half of the decade, pale nail colours were also fashionable. It peaked in about 1964 with pale colours such as ivory, pearl and tan. In 1966, bright reds were once again in fashion.

There were a few fads and short-lived trends during the 1960s. Here are just some of them: