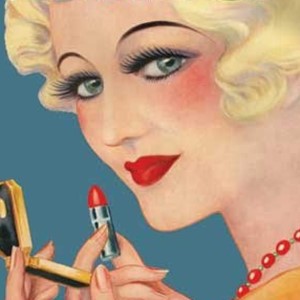 Women’s 1930s makeup was less vampy than the looks of the 1920s. Eyes were still accentuated and lips were strong, but rouge was less featured. Additionally, individuality was encouraged. As more products became available, women could choose colours better suited to them. Makeup was socially acceptable and women wanted to put their best face forward.

Since the dawn of cinema, the stars of the silver screen had influenced women worldwide. Ordinary women wanted a little of that glamour in their lives and copied the film stars looks. In addition, they had the power of endorsement and actresses often appeared in adverts for cosmetic brands, such as Max Factor.

Actresses also gave the 1930s women more confidence to use and wear makeup. Makeup was no longer regarded as something only disreputable women wore. Now, women of all social classes wanted to put their best face forward.

Film fan magazines such as Silver Screen, Motion Pictures and Photoplay let readers into the lives of the rich and famous, along with beauty articles, style tips and cosmetic adverts.

Successful movie stars of the 1930s include Greta Garbo, Jean Harlow, Claudette Colbert, Joan Crawford and Katharine Hepburn – among many others.

Paris was seen by the Western world as the leader of fashion. Beauty articles in magazines often referenced the latest trends in Paris – seen as the guiding light of what was in vogue.

The Great Depression was a severe worldwide economic downturn, starting in 1929 and lasting until the late 1930s. It affected rich and poorer countries alike and had a devastating effect on employment, income, profits and trade.

However, despite the hard times and having less disposable income to hand, women continued to buy and use makeup. The sale of cosmetics did not suffer, particularly during the depression. In some way, the purchase of small luxury items gave people enjoyment and an escape from the dire situation.

Cinema tickets were also in demand – and going to the movies was increasingly popular throughout the 1930s. And, as women took some of their makeup inspiration from the film stars, going to the cinema kept cosmetics valuable and valid. In short, the hard times indirectly fed the cosmetics industry.

Until the late 1920s, a lady avoided a tan at all costs, keeping her skin protected by a parasol, hat or bonnet. However, everything had changed –  it was now fashionable to have a tan.

Now the stigma of a tan was gone, women soaked up the sun’s rays whenever possible – be it at the local lido or a vacation away. There was also an increased enthusiasm for outdoor activities.

Not everyone wanted a tan, of course, and having a pale complexion was just as popular as it had been in previous decades. Either way, women had a choice to be tanned or not.

From the dawn of the 1930s, a more natural makeup look was fast gaining popularity. It was the fashion in Paris and its influence was seen across the Western world.

While women did wear obvious makeup on the lips and eyes, powder and rouge were worn with a more subtle hand than in the 1920s. Additionally, women could choose products and shades more wisely for their colouring, rather than wearing whatever was considered fashionable.

Women applied a light coat of vanishing cream before using face powder to help it adhere to the skin.

It led to brands producing creams with added pigments – often manufactured by simply adding face powder pigments to a cream base. These products were known as “powder cream” or “foundation cream”.

However, they had relatively low pigment levels and only offered a subtle colour tone to the skin. Therefore, the creams were always used with face powder. The cream also had to be applied sparingly and blended well to stop the pigments from looking blotchy.

1938 also saw the public launch of Max Factor’s Pan-Cake foundation. This water-soluble product was applied using a damp sponge and blended over the face. It was a winner from the very beginning.

Complexion powder was used after cleansing, toning and applying a cream. It was the most important aspect of a woman’s makeup and an indispensable item on the dressing table.

Face powder came in ivory, pale pink and white shades. There were also mauve and green shaded powders, as well as powders that added a tanned look.

The powder was applied with a puff and the excess was removed with a face brush.

A fresh and blooming complexion was fashionable – a reflection of the increased interest in outdoor pursuits and healthy living. Therefore, heavy cheek makeup was not a feature of women’s 1930s makeup and rouge was not always worn.

When rouge was used, it was far more understated than the vampy red cheeks of the 1920s. The application created a soft, subtle blush and contour to the face.

Interestingly, rouge was also applied to the ear lobes. Beauty booklets also suggested adding a touch to the outer edge of the ear if it was exposed beneath the hair.

Skinny brows continued from the 1920s into the 1930s. The shape could be rounded, arched or straight – it depended on the wearer’s natural shape and desired look.

As well as plucking brows to a thin line, they could be removed altogether and drawn on in pencil. Jean Harlow, for example, perfected this approach. The 1920s brow was often drawn on lower than the natural brow – and this could still be seen in the early 1930s. However, this practice became less fashionable over time – and the natural brow won the day.

Eyebrow pencil was used to draw, shape and fill the brow. Pencils came in basic colour options including black, brown and blue (used to line eyes rather than colour brows). Brows could also be professionally dyed to darken them.

Daytime makeup was different to evening makeup. Women might not have worn eyeshadow during the day (or kept it very subtle).

Eyeshadow was applied over the entire lid with a finger. It was then blended upward from lash line to brow, creating a soft and even fade to the brow.

Outlining the whole eye in liner was fashionable but, as with all fashions, women could also use liner with subtlty. Brow liners were used to draw around the eyes.

Mascara (liquid or cake) could be found in shades of black, light brown, dark brown, green and blues. False eyelashes were also available.

Lips were painted to look full and pouty, going over the natural lip line when needed to create more fullness. Lipstick was applied to create a Cupid’s Bow shape – emphasising the top lip’s natural bow. Later, the Hunter’s Bow became the thing – created for Joan Crawford by Max Factor. This popular shape continued into the 1940s.

Red was the leading colour of the decade and came in tones of orange-reds, rose reds, maroon and deep burgundy. Candy pink and beige-pink lipsticks were also available.

During the 1930s, fashion magazines and beauty writers were emphasising that nails and lips should be matched – or at least harmonised.

Blood red nails were fashionable in the early 1930s. Opalescent nails were occasionally seen. Platinum Tips was a fashion for having an opalescent silver tip painted over red nails.

Nails were generally filed to a pointed shape. Joan Crawford, in particular, had very long and pointed nails at one time (in and around 1938).

Peiss, K. (2011). Hope In A Jar: The Making of America's Beauty Culture. First University of Pennsylvania.