The use of animals to test cosmetics has been a sore point for many consumers for a long time. Animal-protection organisations from around the world have worked tirelessly to end animal testing for cosmetics and, though the journey is far from over, they’ve had some success in getting it banned in some countries. People often want cruelty-free cosmetics but may not know where to look or what to trust. Here’s our guide to beauty without cruelty.

Cosmetic companies are required, by most countries, to show that their products are safe to use. It means they have to show that it is not toxic and poses no danger to public or environmental health. The ingredients must also not be dangerous in large quantities, such as when in transport or at the manufacturing plant.

In some countries, it is perfectly possible to meet these requirements legally without any tests on animals. However, many of these countries still conduct animal testing – even if there is no legal requirement.

After years of campaigning, China has finally updated its animal testing regulations: According to PETA:

So does this mean an end to animal testing in China? Not exactly.

Companies must take various steps and apply for exemption. If they don’t take these steps or do not qualify/pass the exemption, they will still have to pay for animal testing on their products.

There is also an exception for “special cosmetics”. The companies that make these will still have to conduct animal experiments.

China has come a long way. At least it is accepting that animal testing is not necessary and providing some ways to avoid it. However, there is still a road to travel. Additionally, the cosmetic companies need to step up, apply as required and get their houses in order. Cruelty-free cosmetics are now an option in China.

Cosmetics testing throughout the European Union (EU) is under the 1976 Cosmetics Directive (76/768/EEC).

After many years of campaigning by various animal-protection organisations, EU law eventually changed in 2009. It banned the use of animals to test cosmetics or any of their ingredients.

A further update came into effect on 11 March 2013. It banned the sale of new cosmetics in the EU that had been animal tested in other parts of the world.

What does this mean?

It means no company can carry out new animal tests outside the EU for products to be sold in the EU.

If a product has ingredients that have been animal-tested after the ban comes into effect, a company will not be able to market this in Europe. However, companies can still conduct animal testing outside the EU – when selling these cosmetics outside the EU.

It opens up the possibility of a company being duplicitous. For example, a company could conduct animal tests for some markets (like China) but use non-animal methods for the EU market.

Laws in the United States of America do not require companies to test cosmetics or ingredients on animals. They only have to assure that their products are safe for use. The FDA state:

“The FD&C Act does not specifically require the use of animals in testing cosmetics for safety, nor does the Act subject cosmetics to FDA premarket approval.”

However, many companies do use animal testing, even though US law does not require it. According to the Human Society of the United States:

“… the vast majority of animals used for cosmetics testing in the U.S. are not even covered by the minimal standards of the Animal Welfare Act or counted in official statistics.” 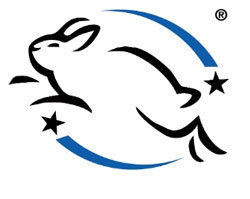 The Leaping Bunny logo is on cosmetics and household products that are certified as cruelty-free. It is also recognised internationally.

Leaping Bunny certification enables consumers to easily identify cosmetic and household products that have not been animal tested.

The Leaping Bunny logo is the only bunny mark that guarantees the product is cruelty-free. Don’t be misled by companies using other pictures or bunny logos to imply they’re cruelty-free!

To become approved, a company must be open to an independent audit. It looks at its entire supply chain to ensure that it adheres to Leaping Bunny’s strict standards and criteria.

Even after it is approved, a company has continual monitoring to ensure it is meeting the standards. Therefore, should a company fail to meet the requirements at any point, it’ll instantly lose its Leaping Bunny certification.

Aware of consumer feelings on animal testing, some companies use legal loopholes to take liberties with the wording on their packaging.

For example, terms such as “cruelty-free” and “not tested on animals” are not legally defined. Therefore, companies can make highly misleading statements on their product labels. Of course, some companies do not test and use these terms responsibly. However, others take advantage of the loopholes.

Makeup brushes were, traditionally, made from animal hair. Sable, badger, pony, squirrel, and goat-hair brushes all come from animals. And this hair isn’t happily volunteered by a generous squirrel, mink, goat, or pony.

Luckily, there’s no reason to use animal hair brushes these days. There are lots of good quality, soft and efficient synthetic makeup brushes available.

Taklon, Natrafil and nylon brushes are devoid of any animal component. The fibres don’t have a cuticle. It makes them less likely to trap bacteria, skin or makeup particles than animal hair.

A company must demonstrate a product’s safety to market it. For example, it can use existing ingredients already established as safe for human use. It can also carry out approved non-animal tests.

Some of these tests include human cell in vitro toxicity screening. It involves human guinea pigs, doing computer simulations and using human skin grown in the lab.

Without animal testing, we can still produce a massive range of safe and effective cosmetic products. After all, there are lots of cosmetic companies out there doing this already.

2 thoughts on “Guide to Cruelty-Free Cosmetics”