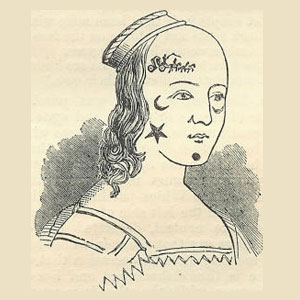 The beauty patch was a little mark with a big impact. Once upon a time, it was all the rage to adorn oneself with beauty patches. These little material creations were stuck onto the skin to emphasise the whiteness of the complexion and to conceal blemishes. They also had hidden meaning and we look at what the little marks came to signify.

Patches were seen during the Roman era when a Roman woman would wear small and round beauty spots called splenia.

Sometimes they were worn profusely, as noted by Roman poets including Ovid and, as quoted below, Martial:

“A number of beauty spots covered her superb forehead.”

A Roman lawyer, Regulus, apparently wore a patch on the right of his forehead when pleading for the defendant, and on the left when working for the plaintiff.

In the 16th century, beauty patches were seen once again, most likely to cover up skin blemishes.

The use of harmful lead-based cosmetics, as well as diseases like smallpox, left people with damaged skin, scars and pock-marks. Therefore, beauty patches were a convenient way to cover things up.

It was during the 17th century that patches really took off and became a fashion statement, in particular for the upper classes. They were worn by men and women alike.

In France, the use of patches increased dramatically under Louis XIV (1638-1715) and continued into Louis XV’s reign.

The French nobility had a fondness for lily-white skin and white-coloured wigs. To emphasise someone’s place in society, the use of white face paint, rouged cheeks and the wearing of patches was the done thing. The French called beauty patches mouches meaning flies.

The influence of the French court on makeup fashion was seen across Europe, and patching was popular throughout the 18th century.

Patching finally fell out of fashion in the late 1700s, particularly as more subtle or natural makeup becomes the favoured look.

While patches had not completely disappeared, their presence was no longer commonplace. 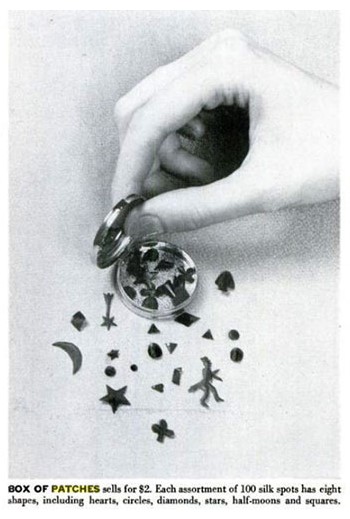 Beauty patches have re-emerged on occasion in more modern times, simply as a fad or fashion adornment. Clara Bow, for example, was photographed with little black patches on her face in the 1920s.

Patches also had a short-lived revival in the late 1940s, where boxes of manufactured patches in a variety of shapes could be bought.

As with many fashion trends, beauty patches did not go without scorn, satire and even outright banning.

The number of patches worn by some did not go unnoticed by those who opposed the fashion. It was often commented upon in poems, plays and publications such as The Spectator.

English clergymen were often opposed to patching – conversely, others were seen wearing them! Some in society felt this vanity, along with the painting of one’s face, was the root of all evil, leading to things like prostitution or plague. Patch fans no doubt simply ignored all such naysayers.

Oliver Cromwell was a spoilsport in general and disapproved of many things – and patching didn’t go unnoticed by him. He used the power of government to ban the practice in England in the mid-1600s, if only for a short time. After the Restoration in 1660, patching resumed and flourished.

The region of Zwickau in Germany prohibited patches by law in 1705.

Patches came in a variety of basic shapes, including spots, stars, crescents, diamonds, and hearts.

Even more elaborate designs could be had, featuring animals, insects and figures. Also seen was a coach and horses design, as well as a tree complete with birds!

The most popular colour was black, as this emphasised the whiteness of the skin the most. However, patches could also be made in other colours to match a lady’s attire or her eyes.

The common materials used were taffeta, velvet and silk. Paper could also be used and poor people may have used mouse skin to create their patches. Whatever the material, mastic or gum arabic was used to adhere patches to the skin. This made sticking patch on very easy – a quick lick and it was sticky. Similarly, they were also easy to remove.

Patches could be homemade or purchased from street pedlars. They would advertise their wears by wearing the patches and shouting out catchy rhymes.

During the reign of Louis XIV, the placement of a patch was more than mere decoration or concealment. Basically, locations symbolised a mood or conveyed a message and were given names, such as ‘passionate’ and ‘gallant’.

Some of the names given to placement include:

Other messages that patches could convey included someone’s marital status. For example, an engaged woman wore a heart patch on the left cheek, indicating she was not available. However, once married, she transferred the patch to the right.

We wonder whether the misplacement of a patch ever resulted in an erroneous message!

The fashionable would keep their patches in a patch box. This was a small rectangular, oval or round box with a lid, often decorated with a hand-painted design. They were similar to snuff boxes, which could also be used.

Boxes were made for either keeping on the dressing table or for taking out. Portable patch boxes were smaller and slimmer than the ones made for the dressing table. Therefore, they were easy to carry, allowing someone to replace patches or slap on more as needed. They could be made from materials including tin, gold or silver and would have a hinged lid, often with a mirror inside.

Patch boxes for the dressing table could also be made from tin, gold or silver, as well as carved wood, porcelain or enamel.